Crime of the Week

An additional $100 to $300 will be added for helpful information to solve a "Crime of the Week" .

Multiple firearms to include collectible pistols, shotguns, rifles, assault rifles, ammunition and rare coins stored in jars were taken in a burglary at a home near CR 513 outside of Skidmore. This burglary took place sometime during the weekend of Jan. 16-17th.
Crime Stoppers is offering up to $2,000 for information that can help solve this crime and that cash reward could go higher if the items stolen are located. $$$ You never have to give your name to Crime Stoppers to receive your cash reward.

STATUS: CAPTURED
CAPTURED
If you know where 29 year old Ernest Ramirez can be located contact Crime Stoppers or the Bee County Sheriffs Office at 361 362-3221. After serving his time in the Bee County jail for a misdemeanor, Ramirez was released on Wednesday, September 25.  After he was released from custody it was discovered that Ramirez had an outstanding Federal Detainer.
The US Marshal Service and Fugitive Task Force responded to assist the Bee County Sheriff Office in the search for Ramirez.  Anyone found to be harboring Ramirez will be charged.  At the time of his release from custody, Ramirez was not armed.
If you want to remain anonymous and earn a cash reward, call Crime Stoppers with information about the location of Ernest Ramirez.
You can earn a cash reward of $1,000 for a tip that leads to the arrest of Ernest Ramirez!
Be the first to contact us!! 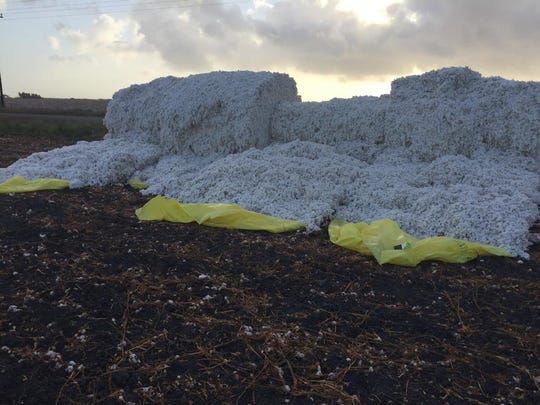 STATUS: SOLVED
Two John Deere Gators, a commercial grade John Deere zero-turn mover, Chevy S-10 Pick-up, and a golf cart were stolen from the maintenance building of Coastal Bend College either  Wednesday night on July 17th or very early on Thursday morning of the 18th.  The thieves entered through a sliding window in the rear of the building. Once they were in the building, they located the keys, opened the garage door, and left with the equipment.  They must have had a trailer to have moved such large items.
If you know anything about the persons who committed this burglary, know where the equipment can be found,  or saw something that could be important, please call Crime Stoppers.  You do not have to give your name or testify in court, and you could earn a large cash reward.

A friendly little dog named Buddy was tied to a fire hydrant and burned alive near his home on the 300 block of East Sullivan Street in Skidmore sometime between July 19-21st.  His owners found his little body under their home by following the path left by the burned grass.   They had just returned from being away from home for a few days. They were shocked because they never had a complaint  about Buddy.  "Step up Bee County, find who did this and set an example for the rest of the state." was a comment from one person after the new of Buddy was spread on social media.
If you have any information about who did this horrific act to end Buddy's life in such a painful way, please call Crime Stoppers.  You never have to give your name, no one will ever know you called us, and you could earn a cash reward.   More importantly, you can keep this from happening again.

On August 27, 2018 at approximately 2:30 a.m. an unknown male approached Papa’s Market from the north side. The male was wearing a black mask and black clothing. The male threw a large rock into the window causing it to break. The male can be seen entering through the broken window. He took several items from inside the store then jumped out the window and ran off westbound from the store
If you have any information about this burglary that can help solve this crime, and want to be rewarded, contact Crime Stoppers.  You never have to reveal your identity.

A male clerk working in the store said a man stepped up behind him, shoved something against his back and said he had a weapon.  Although the clerk never saw a weapon, he believed the robber had a handgun.  The man left on foot with an undetermined amount of cash.

Investigators believe the robber had a vehicle waiting nearby because police were unable to find anyone in the area who matched the description.  The man was said to be about six feet tall with a stocky build. The clerk was unable to provide a detailed description of the robber because he wore a hoodie with what appeared to be a woman’s stocking over his face. He also wore gloves. Chief Bridge said the suspect might have been African American.

Crime Stoppers has pledged up to $500 +$700 (private donations) + $300 as a "Crime of the Week" = up to $1,500 is offered for information about the vandalism to the stars at Veterans Memorial Park.  Vandals broke a number of red stepping stones at the monument honoring veterans killed in recent wars.
Local veterans have added to the reward fund in order to support their brothers in arm who gave their lives for our freedom, and were honored at the memorial.
If you have any information about this, or any other vandalism to a veteran memorial in the county, please call Crime Stoppers (362-0206), use the mobile tip: P3Tips, or use this website. 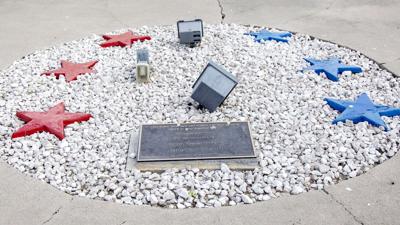 Crime Stoppers is looking for the identity, or any other information that might lead to the arrest of a suspect believed to have been involved in a number of  burglaries.  The man was photographed by a security camera in one recent burglary.
He is believed to have been involved in a number of burglaries of ranch houses and hunting cabins in Jim Wells and Duval Counties.  He may drive a white Infinity SUB with stolen license plates (HJT9953).  In one burglary he stole a Remington Model 870 pump shotgun and a Ruger GP 100 .40 caliber revolver.
If you have any information about this suspect, call Crime Stoppers at 362-0206, use the mobile app: P3Tips, or press the "Submit a Tip" button above.  You never have to give your name to Crime Stoppers, and if your information helps law enforcement catch the suspect, you could earn a cash reward. 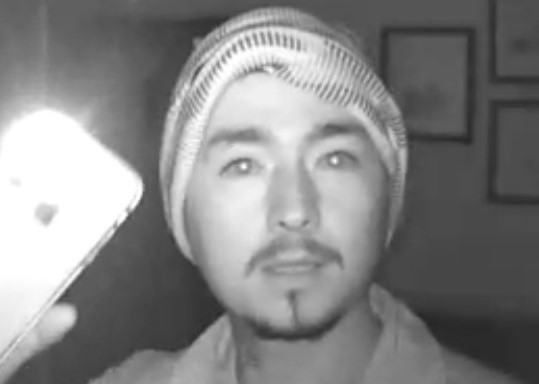 Crime Stoppers needs your help to solve a burglary that occurred April 21st in Tulsita TX.

A deputy was dispatched to an address on Dirks Ave at 8:00 p.m. on the 21st of April.  Upon arrival the deputy met with two separate complainants.  One reported "someone had broken a window in his residence and then made entry through the front door and had stolen a Television set".

If you have any information concerning these crimes, please call 361-362-0206,  use the P3Tips app on your cell phone, or use the "Submit a Tip" button above. If your information leads to an arrest or recovery of stolen property, you may be eligible for a cash reward up to a 1,000.  You will remain anonymous, caller ID is never used, and Crime Stoppers never ask for your name.

Crime Stoppers pays cash for information that leads to arrest or recovery of stolen property.

Do you know where to find Tomas "Shark" Suniga?   Suniga is wanted for Robbery and Assault with a deadly weapon.  Crime Stoppers needs your help to locate him.

Suniga is 6' 1" tall weighing approximately 200 pounds, and has numerous tattoos on his upper arms and chest.  At least one of the tattoos contains the word "Shark".

Suniga is believed to be in the Beeville / Skidmore area, and has been wanted since Jan. 2017 !

If you know where Suniga is staying, or the type of vehicle he might be driving, please call Crime Stoppers at 361-362-0206, use the P3Tips app on your mobile device, or, press the red "Submit a Tip" button above.  If your information leads to an arrest, you may be eligible for up to a $1,000 cash reward. You will remain anonymous, caller ID is never used, and Crime Stoppers never ask for your name. ($100 -$300 will be added to the reward because it is a "Crime of the Week")

If you have information on Tomas "Shark" Suniga, or any other crime, call Crime Stoppers at 361-362-0206 or 877-362-0206. Crime Stoppers pays cash for information leading to arrest or recovery of property, and you will remain anonymous. 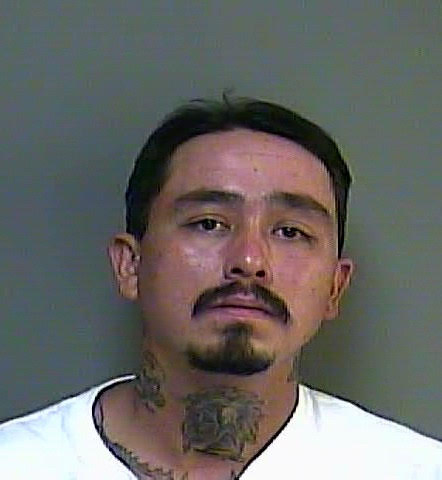 On the evening of March 21 or the early morning of March 22, A&D Alignment located at 2512 US 59 was broken into and a Century Safe, a brown briefcase, and cash drawer were stolen.  The safe contained $6,000 in mixed bills, the briefcase contained $4,000 in cash and the cash drawer contained $600 cash.
If you saw any suspicious vehicles around A&D that evening or morning, or have any helpful information about this burglary, call Crime Stoppers at 362-0206, use the mobile P3 app, or make a tip on this website.  As a Crime Stopper tipster you never have to give your name, and could earn a cash reward. 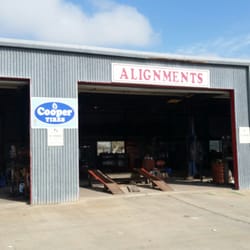 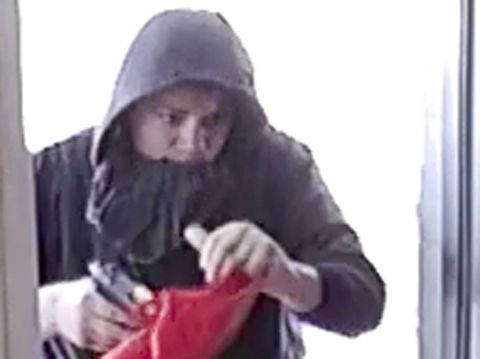 The Live Oak Sheriff`s Office would like your help to solve this armed holdup at the One Stop on FM 99 interchange just west of interstate 37 near Whitsett and the Atacosa County line.

At 2:38 p.m. two men entered the convenience store.  One man held a .45 handgun, a red bag and demanded money.  He was a light-skinned Hispanic wearing a hoodie, black shorts, and black crocs with black socks.  The other man was a dark-skinned African-American wearing a black t-shirt with "DESIST" in white on the back, dark sweat pants, and black Nike sandals with black socks.  They left in a late 1990s or 2000s black car with a broken tail light.

Crime Stoppers will pay a reward for information about those responsible for the damage done to  Glenwood, St. Joseph, and St. Rose Cemetery in December 2014..


A cash reward of up to $500 is offered for information that leads to the return of the historical marker for St. Rose Cemetery. 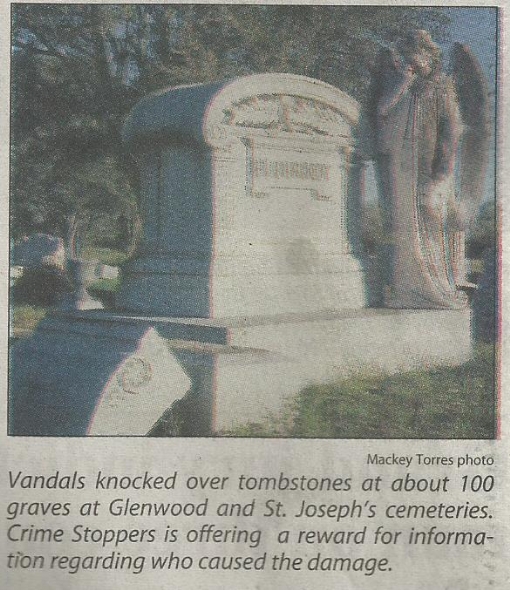 City of Beeville PD is looking for new information about a stabbing death of a 72 year old man at the Emma Finka Villa Apartments at 1101 E. Kennedy St. on December 20, 2012.

Evidence at the scene led the investigators to think that the victim may have known his killer, or killers.  The investigation reportedly turned up a potential suspect, but not enough evidence to make an arrest.

If you have any information that will help solve this case, please call Crime Stoppers, or make a tip on this website.  It could earn you a reward up to $1000, plus an extra up to $300 for it being a Crime of the Week case. Help solve this Cold Case! 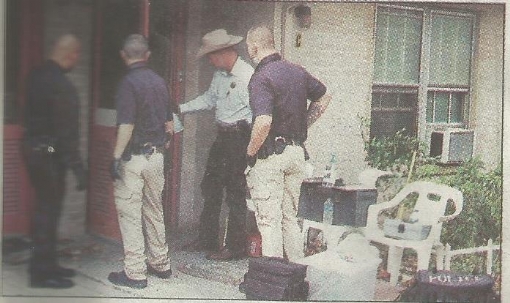